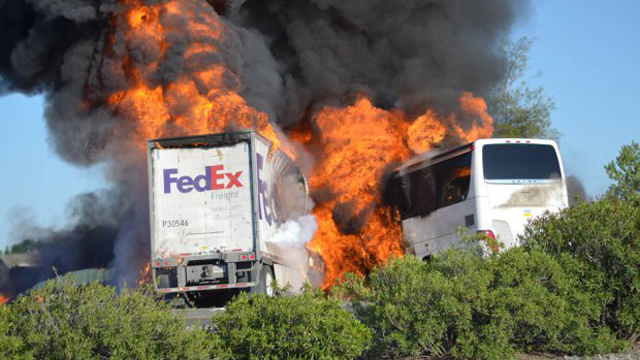 Federal research states that road mishaps kill one Canadian every three hours, disable one Canadian every seven minutes and cost the country about $27 billion a year. In any given year, the average Canadian has about a 5% chance of being involved in a crash, such as the famous 96-car Highway 400 pileup in Ontario just this year (for more info, see this report). With such a high car crash probability, there are bound to be more of them around the world. In other words, if you want to save your Venza or the freakishly expensive Audi A8 (if you indeed own one), learn from the following deadly car crashes and you can thank us later! Just after 9 AM, on a stretch of I-75 in Tennessee, dense fog blanketed the highway and led to a 70-car pileup. There had been warning signs posted, but conditions deteriorated too quickly for them to help the motorists. The wreckage stretched for half a mile and caused 13 fatalities. The car fires added to the chaos and 33 different fire companies responded to the call. Survivors say that it sounded like endless bombs and gunshots going off as one car after another plowed into the mess. Tennessee has since installed and improved fog its warning system with fog sensors that can change the read-out on highway signs to alert motorists and also close on-ramps to prevent pile-ups. Reflective markers and flashing lights were also installed to help guide the cars stuck during foggy conditions. As traffic increased with travelers returning home after the Thanksgiving holiday weekend, winds along I-5 in California reached 40 miles an hour. The usually lush farmlands had been left unplanted due to a severe drought. The wind whipped up a fierce dust storm that severely reduced visibility. This all led to a pileup of 104 vehicles, including four tractor trailers, along a one-mile stretch of highway. After hours of rescue efforts in the continuing dust storm, 17 people had died and 150 were seriously injured. The pileup led to thousands more being trapped in their cars for another day while road crews cleared the wreckage and worked to re-open the highway. A lone driver in a 1998 Dodge Viper was pushing 170 MPH on the Highway just outside of Markham, when he lost control on the last stretch and flipped a few times. Eventually, the car slammed sideways into a pole, resulting in deadly injuries. Given the speed, this car crash stands out in people’s mind. The Fresno highway pileup has been called as one of the largest collections of deadly car crashes in the history of the U.S.A. More than 100 cars and trucks crashed on a fog-shrouded freeway Saturday, killing at least two people and injuring dozens more, the California Highway Patrol said. When questioned, firefighters who arrived on the scene stated that they could still hear cars crashing into one another after they got there – a brutal domino effect. A thick fog known as the “Tule fog” in Central California was the main factor. On the morning of September 3, 1999, a heavy fog rolled onto Highway 401, east of Windsor. The pile-up that followed involved 87 vehicles. Eight people were killed and 45 injured in what is recognized as the largest pileup in Canadian history. Ice and snowy conditions resulted in a minimum of 20 automobile accidents in one night in Washington County, Maryland. Among these, the worst was a pileup involving seven tractor trailers and 35 cars. The accident claimed two people’s lives and injured 35 more, with 12 of those being seriously injured.

Stefan Eriksson, the former head of Gizmondo, a handheld gaming device, crashed his Enzo in Malibu going 162 miles an hour down the Pacific Coast highway. Thanks to the accident, his car split in half against a lamppost. The most amazing fact remains that he walked away from the crash, accused of lying to try and cover his story. The crash sparked an international investigation that sent him to jail for 18 months. You can read more about the mishap in this article. Mike Harmon had a near-fatal crash during practice for the Busch series race at Bristol in ’02. That impact alone was enough to tear his car in half, but he was unfortunate enough to have another car crash into him, barely missing his exposed body. Safety cages saved him first, while blind luck helped him out second. This deadly car crash involved a police chase, where the driver was reportedly speeding at 165 miles per hour on an Arizona freeway. Before he could steer his way out, he lost control into the back of an 18-wheeler, resulting in a deadly freeway collision. Right near Hampstead, Ontario, a van with 13 migrant workers onboard collided with a flatbed truck, killing 11 people in total. One of those people was the driver of the truck, while the other 10 were the workers. All of them perished at the scene, while three others were carried off to Stratford General Hospital to receive treatment. As for the vehicle damage – one whole side of the van was completely hacked off, while the truck lay on its side in a pile of its own pieces.