The Truth About Lying: How to Spot When a Salesperson is Lying? I’ve had my moments when I’m too quick to trust what someone is saying and in my case it was when I was buying my new car. However I found a simple set of tests to find out if someone, whether it be a salesperson or not, is lying to you. And no, the advice isn’t that they’ll look away or avoid eye contact… you’re not dealing with amateurs here.

According to Feldman’s study of interactions between random bystanders, 60 percent of people surveyed lied at least once during a short conversation with another stranger. The fact is, we all lie and there are people who have to everyday for work. So we need to equip ourselves with the skills to notice when someone is lying to you.

Here are some key indicators you can test out for yourself to see if someone is lying to you or not:

The Eyes Tell it All 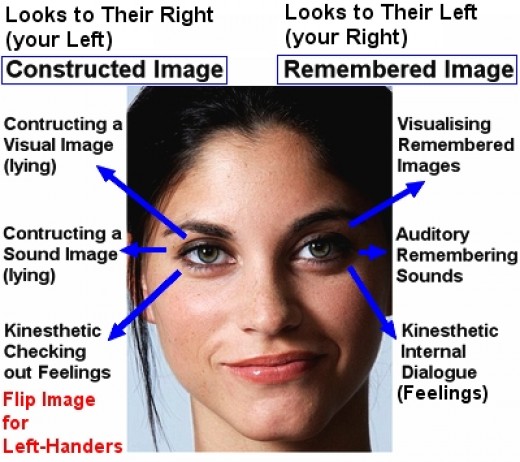 I want you to go to a mirror or pull out your iPhone 5S (that I know you just bought) and film yourself while you do this quick test. Answer me this: Who was the last person you had an intense argument with and walked away from in the last three months?

Right there! You’re eyes should have shifted right or left. What’s happening is that your mind releases stress hormones because you’re working to produce the correct answer under pressure and the level of difficulty requires a sense of recall. This attempt at recalling information is shown in your eye movement.

Now the lie. By nature lies are creative stories and actually draw on a different side of your brain to respond with an appropriate answer. Again in front of a mirror answer me this: An elephant walks through that door right now wearing a sombrero. What does he say and why is he here?

Your eye movement should have shifted in the opposite direction. There’s even more studies that have shown your eyes move up when recalling anything that requires imagery. When trying to recall of sounds your eyes will stay at middle and when recalling your feelings your eyes wander down.

If you can stump your liar with one controlled tough test question and follow up with an intensive creative question you’ll see this pattern emerge.

One of the most obvious ways to detect a liar is to see if they pause when answering a question. The thing is how can you tell when someone is actually taking their time to think or just trying to scramble to get the answer. They might show signs of nervousness or hesitation, but realistically with a professional salesperson it won’t be as evident.

Here is a test you can use next time you want to know if a salesperson is lying to you. Ask them a series of questions that they are well trained to answer – about 2 or 3 in a row with a bit of ample time in between. Some examples would be if you’re talking with a car dealer:

Pay attention to how they answer the first few questions and how long it takes him or her to respond. If there is a shift in timing, either taking a longer pause or they’re spitting out an even faster answer than the previous it’s a good sign that they are lying.

The point is that the delay in lying needs to be considered in context of whether it’s appropriate for the question. Our minds are connected in a way where our non-verbal and verbal actions need to match. Like saying yes or agreeing to something while nodding. When head on with someone you think may be lying you’re watching for a lack of congruence.

What I mean is that what’s coming out of their mouth is different than their body language. For example, in poker you can tell when someone has a weak or strong hand by comparing the players’ arm movements to the rest of their body. This is easier to notice within people you’re acquainted with, but strangers it may be the simple case of a false positive. As well it has to be a longer tail response and not a short answer to be an actual sign of lying.

Now don’t go running off accusing everyone you know as a liar. There are many other lie detection techniques and these are just a handful you can use. Give it a test run with a friend of yours and see if you get the same results as I did when I tried out these techniques. And let us know if they worked or of any other ways you’ve spotted a liar in the comments below: